Award for the plan of the main building in Delft

On behalf of the Municipality of Delft, Ontwikkelingsbedrijf Spoorzone Delft (OBS)  awarded the tender for the main building on the south west side of the station square, to the combination Smit's Bouwbedrijf BV / Vink Bouw Nieuwkoop BV, with their ‘Antoni’ plan.

Prominent location
The plot where the main building will be built, is part of the newly developed urban area known as 'Nieuwe Delft'. The location is iconic and in the heart of the city: by the station square, next to the old station building and on Coenderstraat - one of the main roads of the new city area. It also flanks two parking lots that are currently in development.

In March 2016 a European tender was launched for this lot, for a building plan totalling approximately 12,500 m² gross floor area, which includes a public underground bicycle parking facility for 2,400 bicycles. In the summer of 2016, following a pre-selection, five parties were invited to prepare a Preliminary Design for this lot and to submit a bid. 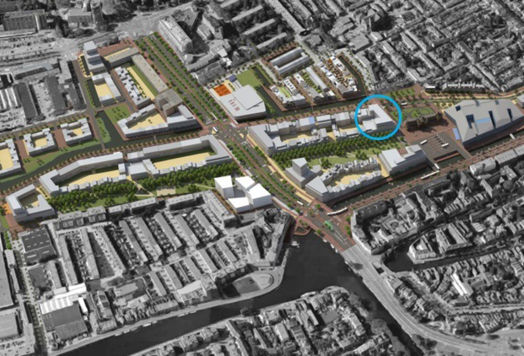