The new building of "De Knotwilg" concerns a primary school on the Vreeswijkpad in Amsterdam with a total of 2,950 m2 GFA. It is an educational building for 10 groups with progression to 13 groups. There is also a pre-school and after-school childcare for children aged 0-12 and a gym is being realized.

"The Pollard Willow" becomes a so-called BENG school (Almost Energy Neutral School). The primary generation of heat and cooling is provided by two air / water heat pumps. The heat / cold release is provided by using underfloor heating as a basis and a variable volume ventilation system, which is also controlled per room based on CO2 measurement.

A special feature of this school is that a greenhouse is being realized on the roof. The air for the ventilation of the school is (partly) drawn in through this greenhouse.

Pieters Bouwtechniek acts as the main constructor of this project. To make the building flexible, it can be constructed using a steel construction and hollow core slabs. And the whole is placed on a foundation grid poured into the work, which is supported on foundation piles.

Bouwgroep Buitenhuis made timelapses of the construction. 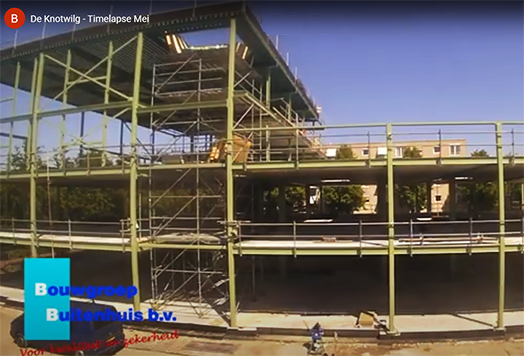 Screenshot timelapse May
Print
Return to the news overview