Galeries Modernes in Rotterdam has reached its highest point.

The prominent building on the Hoogstraat will be converted into a hotel according to a design by KAAN Architecten. Design hotel chain Motel One is opening a branch with 180 rooms in the Reconstruction Building from the 1950s.

Galeries Modernes, which was originally designed by   Van den Broek en Bakema, opened its doors in 1956. After the department store closed fifteen years later, the building has housed other shops and functions, including recently a Kruidvat and a gym. In the new situation, there will also be shops in the building.

The building will not be renovated to its original design, but some important features will be translated into a contemporary design. The building will once again have a transparent plinth and the volume will be provided with deep cut-outs. On the other hand, the predominantly closed facade parts make way for alternating open and closed strips.

An extra (fifth) floor will be realized on top of the building, with a pavilion, terrace and green roof - and a view of the surroundings.

The transformation will increase the floor area from 5,500 to 7,500 square meters. The building will also have a patio, which will provide extra daylight and greenery. Completion of the project is scheduled for the fourth quarter of 2022. 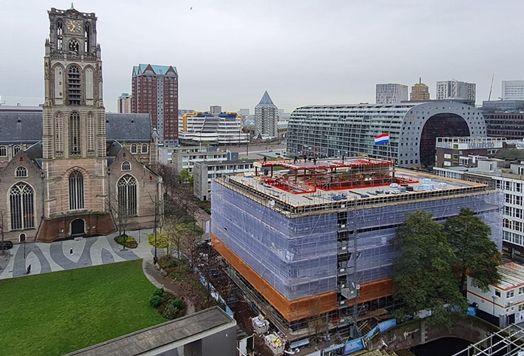