The Diamond Exchange, Capital C Amsterdam has been awarded a German Design Award 2021, one of the most prestigious architecture and design prizes. After a major renovation to a design by the architectural firm ZJA in collaboration with Heyligers design + projects, the national monument from 1911 has regained its original grandeur. The High Light shines on the roof, a modern and characteristic dome made of steel and glass. Reborn as Capital C, the national monument is once again an essential part of Amsterdam as the center of the creative industry.

Monument appears in all its glory
ZJA's design for the Diamond Exchange, Capital C realizes a few radical changes to the building. A large and remarkable monument that had fallen into disrepair reappears in all its glory. On the roof, two striking towers, the original eaves and the tympanums from the original design by Gerrit van Arkel have been restored. Tile panels were recreated from old drawings and photographs and the entrance was returned to its original position. The national monument has regained its graceful Art Nouveau contours and the High Light shines on the roof as a new jewel for the city.

New award on the roof
The spatial dome is independent and stands a step back from the facade line and separate from the bell tower. Where the two replica towers are on the roof, the ribs of the steel construction have been omitted and a green roof terrace has been created. The High Light is an eye-catcher, but the restrained position on the roof and the spatial, transparent construction make it modest and honorable to the national monument. Historic and modern architecture merge in a respectful way and together form a natural whole.

State of the art architecture and construction
The High Light is an example of state of the art architecture and construction: the dome is a grid shell, which means that the constructive strength is provided by the double curvature of the elements. A principle that made large spans possible. The long sides of the dome ostensibly connect to existing elements of the monumental building, but these proved unable to absorb the forces from the gridshell. For this reason, Pieters Bouwtechniek designed and integrated a 'giraffe and transfer construction' into the design, which could absorb the forces from the grid shell, so that the monument remains intact at the height of the roof. The shape of the dome and steel construction were parametrically designed and optimized by ZJA and Pieters in close collaboration. This made it possible to realize the current form of the High Light, not only because it was technically feasible, but also cost-effective. In addition, the shape could be generated in a natural, controlled way.  Pieters Bouwtechniek is responsible for the structural design and Octatube for the implementation of the High Light. DCV Bouw was involved as a contractor in the project. 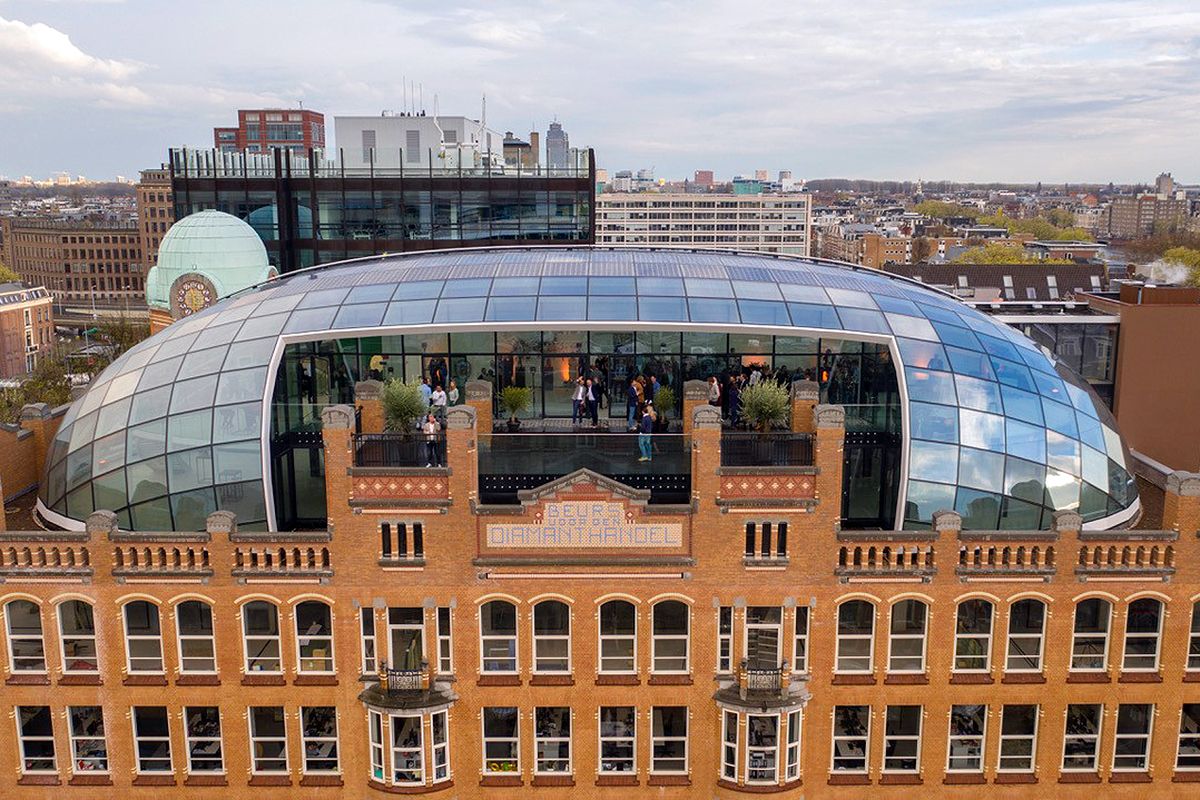