The social side of construction

Many people still regard construction as a man's world. Paula Zee (23), Rianne Stobbe (26) and Evelijn Vink (27) prove the contrary.

Paula, Rianne and Evelijn work at Pieters in the Zwolle Billiards Factory, where architects, engineers, designers, technicians and creative strategists work under one roof. A dynamic working environment that fits well with the three young women. Whether they all consciously chose a career in construction? No, not that. For Paula, the choice to study Architecture was purely coincidental. "I had a hard time choosing and took a gamble for Architecture during an information evening. I enjoyed it so much that I decided to go to an open day, "she says. Also for Rianne the choice was not immediately obvious. "It didn't matter much to me, as long as I got math. My high school mathematics teacher advised me to study Architecture and I am still grateful to him for that, "said Rianne. Their colleague Evelijn, who has been working at Pieters since the beginning of November, chose a different route: she studied Civil Engineering at TU Delft. What the three have in common is a fascination for the social side of construction: "As structural engineers and modellers, we make buildings that people will actually use. So it's not just about making drawings and calculations, "says Evelijn.

Challenge and variety
The three are pleased with their work at Pieters. Modeller / structural engineer Rianne finds variety in her work very important. "In my first job at another company I generally did repetitive work. After hearing good stories from a former colleague who had started working at Pieters, I decided to make the switch. "At Pieters there is plenty of variety for Rianne. All types of projects have already come by, from houses and apartments to schools and shops. "I have a lot of challenges here, sometimes a little too much. Although I'd rather have too much than too little, "she quickly adds. Paula also loves the variety and challenge in her work as a modeller / structural engineer. "I learn something new every day. That is how I finished a challenging calculation this morning, "she says. Structural engineer Evelijn, who has only just finished her first working days, consciously chose Pieters. "Although Pieters is smaller than other engineering firms, the construction department is larger. I therefore expect that I will have the opportunity to work together with specialists from whom I can learn the profession well. I also see enough growth opportunities to eventually work as a structural designer on larger projects. You will then be involved in the process much earlier. It seems fantastic to me to design a supporting structure for the shape that the architect has devised. "Rianne sees himself as a manager in the future. "In about ten years I would like to count less and manage more. I like contact with people and I really enjoy consulting with architects and contractors, for example, "she says.

Communicate without words
And then the most pressing question: according to Paula, Rianne and Evelijn, is construction still a man's world? "When I was studying engineering, some people asked me if I was going to be a construction worker," says Paula. "I think many people have a wrong view of construction. It is much broader and more social than they think. "Good modeling and construction also requires close collaboration and clear communication. "You can think of everything behind your desk, but ultimately the contractors on the construction site must be able to make it. You have to think carefully about how you put something on paper so that everyone understands it, because we actually communicate without words with our drawings. All parties involved must extract the same information from the drawings, otherwise it will go wrong during construction, "says Paula. Evelijn believes that something can be done about the image of working in construction. "If you open the site of any company, you often only see photos of men. Once inside, it often turns out to be very bad, "she says. That was also the case with Pieters. "We have a good mix between men and women and that works very well," concludes Rianne. 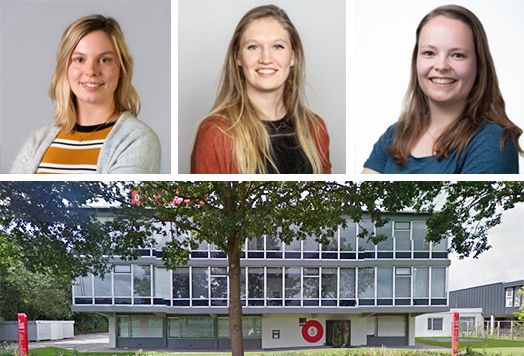 Above: from left to right Paula Zee, Rianne Stobbe and Evelijn Vink | Below: Pieters Bouwtechniek Zwolle
Print
Return to the news overview