Monday 28 October 22.00 a start was made with the dumping of the foundation of CasaNova in Rotterdam. This 110 m high building will be placed on a 2.0 m thick foundation plate that will spread the forces of the tower to the foundation piles. This required a dump of approximately 1,350 m³ of concrete. The landfill took approximately 24 hours to complete.

In the timelapse below, the pour of the foundation can be clearly seen.

At the most complex locations, the reinforcement in the foundation consists of 2 layers around 32 and 6 layers around 40 bars at the bottom of the pole.

For the transverse force, the pole is filled with T-Heads. These have been applied because of the large amount of shear reinforcement required. Version with traditional brackets was not an option. In order to be able to apply it, it was necessary to place the under-reinforcement exactly on size and one above the other. The "base plate" of the T-Head can then drop exactly between the reinforcement.

Simultaneously with the poer in front of the building, the faucet pillar is also included in the landfill.

To be able to realize the force introduction to the ascending columns and stability core, it is necessary to have the cuttings come from the subnet. Due to the limited space, part of the cuttings had to be braided in the different layers of the underarm. The cuttings of around 40 (46 + 54 pieces) have a length of 5.5 meters (excluding bending) from the bottom net. Weight per cutting is approx. 70 kg. These cuttings immediately form the column reinforcement. Overlapping welds are not desirable in this zone (no space for and welds for around 40 become very long).

The T-Heads must be ordered in the correct length. For the zones with the greatest transverse force, the T-Heads are on a 150 x 150 mm grid. arranged between the main reinforcement. To leave room for concrete, varying the length of the T-Head is necessary.

The compaction of the concrete with strong reinforcement. With too fast hardening, a subsequent layer of concrete no longer adheres well to the previously poured concrete.
Preventing excessive hydration heat for limiting the hardening shrinkage.
Coordination of the time of pouring to the outside temperature, choice of the concrete mix and the available capacity of the concrete plant.
This has resulted in a concrete dump of 1,350 m³ in 24 hours, with the application of three concrete mixtures and a start of the dumping at 10 p.m. 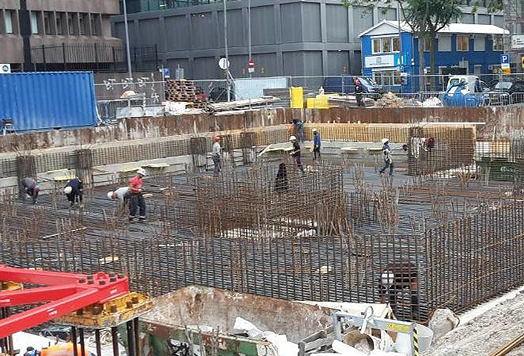 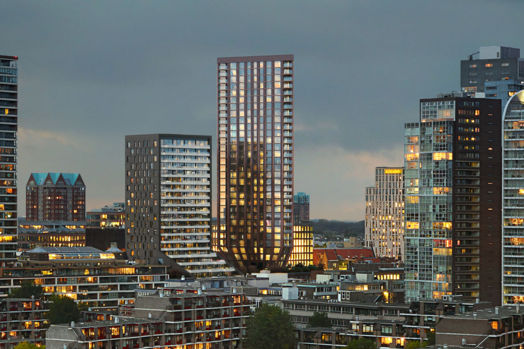