This year the Gemma Smid Architecture prize was awarded for the seventh time. Traditionally, the award ceremony takes place during the Day of Architecture, on Saturday 2 June 2018. The prize is named after former Alderman Gemma Smid-Marsman, because of her commitment to the architecture in Zoetermeer.

The Alfrink College in Zoetermeer has won the audience award this year! The approach for the renovation was a new entrance and a limited extension. Due to old construction faults, however, almost the entire façade had to be replaced. The jury is of the opinion that the renovation of the Alfrink College (client Alfrink College) is a positive example of how the technical sustainability challenge can be used to make a quality improvement for the existing building and its surroundings.

With existing materials and frames Ralph Goutier found a very coherent new tone in the design. This is clever because the school was an incoherent whole of building parts in different architectural styles, from different periods. 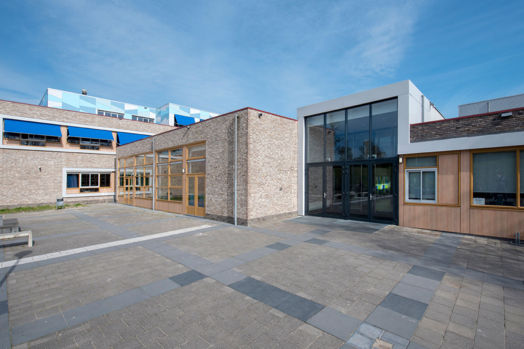