The former Diamond Exchange on Weesperplein in Amsterdam has been renamed Capital C, a meeting space and co-workspace for the creative industry. The national monument has been meticulously restored according to the original architectural drawings by architect Gerrit van Arkel. The new eye-catcher is a diamond-shaped glass "dome" on the roof, a nod to the original function of the building.

The Diamond Exchange was built and delivered in 1910. After various additions, renovations and a fire, there was little left of the allure of the Art Nouveau building at the start of this century. A major renovation and modernization was necessary to make the building an international center of the creative industry. Not only did the foundation have to be repaired and strengthened to be able to support the new roof structure, a four-meter deep basement had to be built under the building. A challenge that required intensive cooperation and close coordination between architect, contractor and constructor.

Stable and efficient
Koen IJff, project leader at Pieters Bouwtechniek: "With the foundation repair of a building such as the Diamond Exchange, usually the jacking of the existing structure is started, whereby the weight is transferred to the new foundation piles via a temporary transfer structure. With its 9,644 m2, the Diamond Exchange is a relatively large and heavy building, which would require a large table construction in such an embodiment to guarantee the stability of the building during the construction phase. That automatically also means a large building pit, sheet piling with heavy profiles and a lot of steel and support work. "A different approach has been chosen. The concrete floor of the ground floor was first poured, with steel reinforcement constructions included therein. The existing superstructure has also been reinforced by thickening columns. This approach provided more stability in the implementation phase, because the building could rest on the existing structure, also during the excavation of the basement. That would not have been the case with the more usual method. Moreover, the chosen approach resulted in fewer risks and more efficiency during implementation, because the work could start simultaneously, both below and above ground level. "It is always a question of what you will encounter when digging under buildings that are in places with a long history. If an important archaeological find is made, the work will be stopped for a few months. By first pouring the floor from the ground floor, the work above ground level could at least continue as usual, "said IJff. Of course everyone hoped for a forgotten box of diamonds, but unfortunately only old foundations and caves were found during the excavation work.

Minimal movement
The vault of the Diamond Exchange and the offices of the Incassobank were once located in the original basement of the building. The basement had to be no less than four meters deep, so that users of Capital C can park their car and bicycle there. An additional challenge in the implementation was that the new columns in the basement are not directly under the columns of the superstructure. In the ground floor floor, therefore, a considerable force transfer takes place between vertical elements. The existing columns on the ground floor were first reinforced around with concrete poured in, after which the new columns were built in the basement behind the old columns. Subsequently, a new steel frame was made around the base of the reinforced column, holes were drilled through the existing columns and the temporary stamping was applied. "A sudden transition from one force to another when removing the temporary stamp may have a negative impact on the floor of the ground floor. That is why it was decided to first take over the loads per pile group (or column base) in a jack construction and then remove the temporary stamping and allow the force transfer to take place in a controlled manner. Meanwhile, constant measurements have been taken of what this did with the floor of the ground floor. The movement has not been greater than 1 millimeter, "according to IJff.

Parametric design
On the roof the two striking towers and the original eaves with fencing and timpanes from the original design by Van Arkel have been restored. Behind it the new eye-catcher arises: an impressive glass dome, which - very appropriately - is reminiscent of a diamond. The design of ZJA Zwarts & Jansma Architecten is based on the principle of the grid shell, a double-curved construction that is made up of a grid instead of a dense surface. This gives great freedom of form and enables large spans without having to install extra columns. In this way a light-looking, transparent roof structure has been created.

The dome is parametrically designed, a process in which a design is made based on data or relationships between components. This not only allows you to make complex geometric constructions, but it also offers the possibility to make changes up to a late stage in the design process. Whenever the architect adjusted the shape of the dome - slightly lower, higher, narrower or wider - this new shape could be directly linked to Pieters' s calculation model. Form finding was then used to find the most ideal shape for the dome, which also determined the final construction. The result is a relatively light steel construction with double-glazed panels that are as flat and square as possible. The steel ladder frames were made in the Octatube factory and then transported to Amsterdam, where they are connected to each other on site with steel connecting sleeves. The glass panels are fixed in the steel frame.

Subtle addition
And how is the existing building capable of supporting that enormous weight of the 45-meter long and 15-meter dome? "It would be complicated to place such a dome on a lawn, let alone on top of a monumental building from 1911," says IJff. "That is why the steel structure is not based on the outer walls, but on new steel frames that together form the sixth and seventh floors. These frames are again based on the reinforced, existing column structure of the building. "This means that superstructure, where a rooftop bar with roof terrace will come in, is a bit back from the original facade line and does not immediately catch the eye. In other words: a subtle addition to an already striking building. 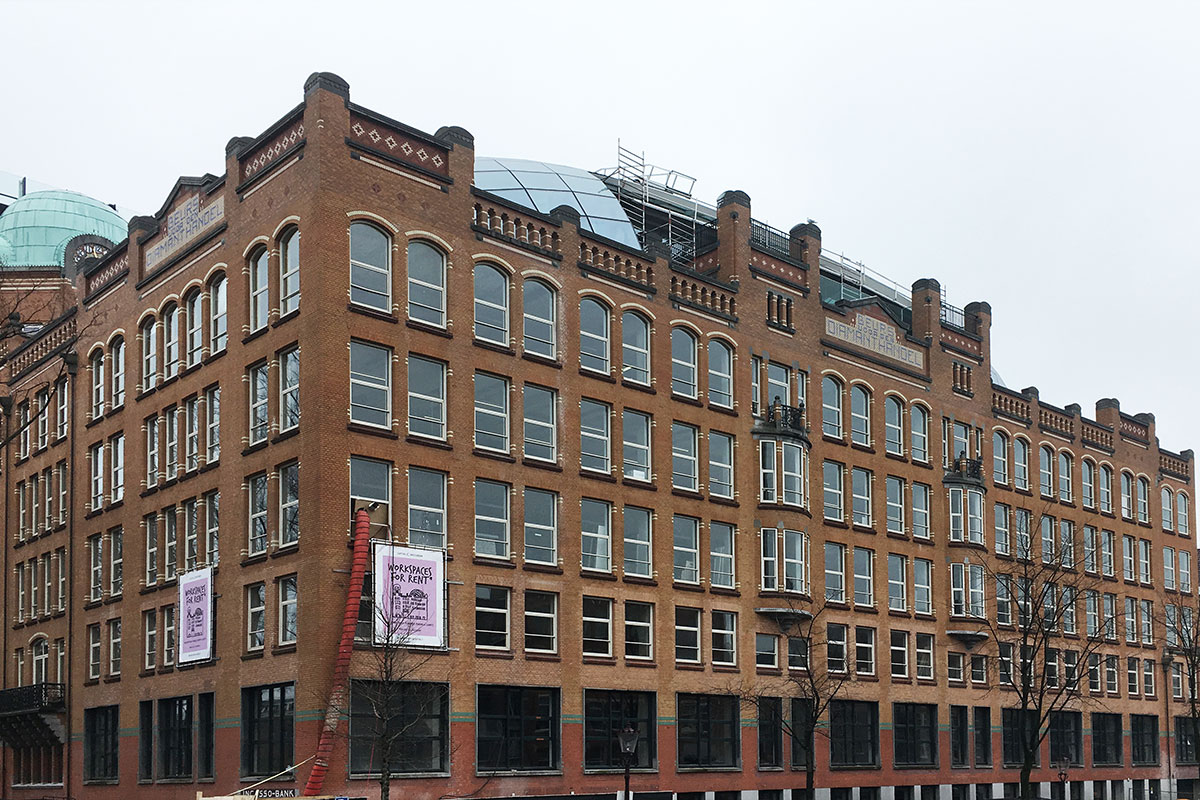 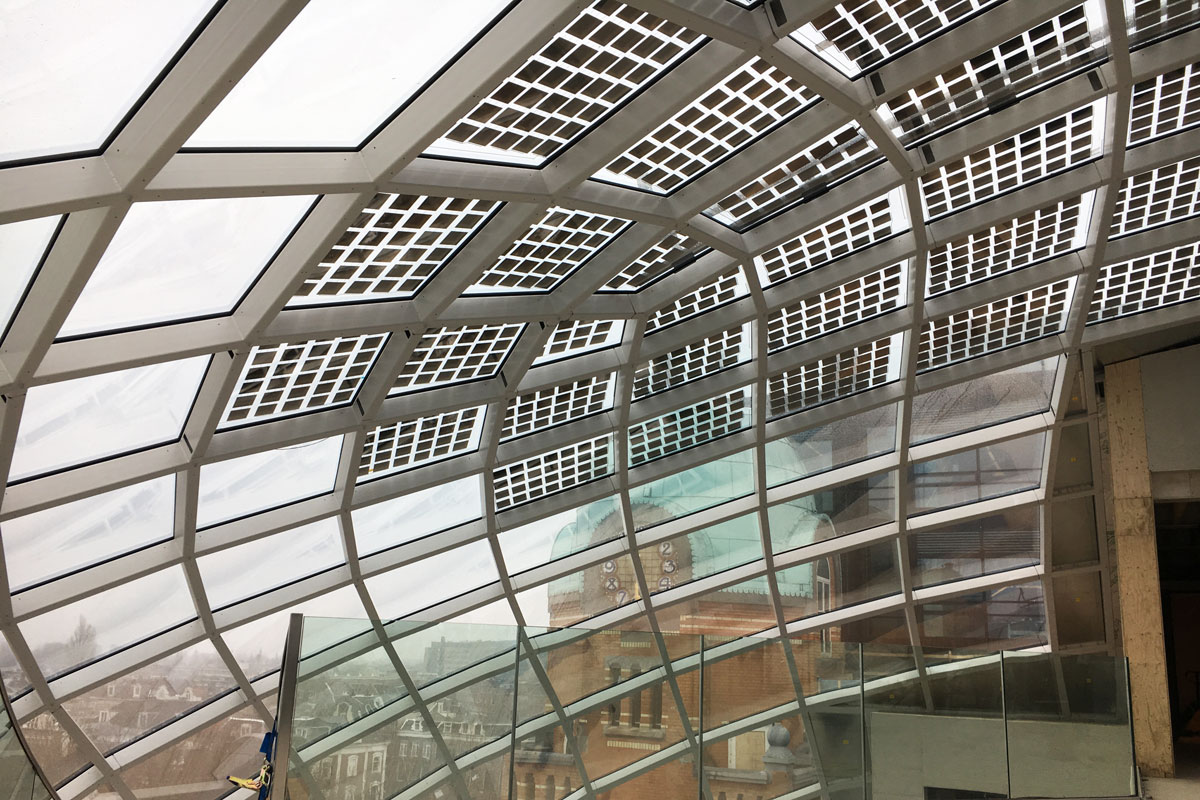