The former Knoopkazerne in the center of Utrecht, formerly the headquarters of the Royal Army, will be transformed into a combined office and meeting center for the government in the upcoming years. In addition, a variety of guest and city workplaces as well as catering functions are realized. An important part of the task is to align logistics flows for different users. The architect Cepezed manufactures the architectural design for the transformation.

Consortium R Creators, the collaboration between Strukton, Facilicom and Ballast Nedam, received from the government real estate company the task of redeveloping the former ‘Knoopkazerne’. Pieters Bouwtechniek is the structural engineer who designed the foundation in this project. After commissioning in 2018, the operating phase begins with a term of twenty years.

The outdated complex is redeveloped into a state-owned office where various government services will move in. The work consists a combination of demolition, renovation and expansion. The starting point is to demolish as little as possible and to reuse as much as possible. The Casco of the former ‘Knoopkazerne’ is transformed into a government office and as an extension meeting center for a thousand visitors. An atrium connects the meeting center and the transformed ‘Knoopkazerne’. The outdoor space is decorated with 'The Knoopplein' and a temporary pavilion. 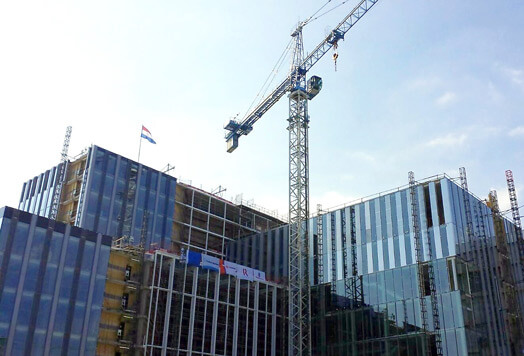