At Tilburg University, the construction of the new education and self-study cen-ter is in full swing. When it's ready, 2500 to 3000 students will use the build-ing every day. In March 2016 we started working on the design with which the tender was won, together with the design team. After a super fast and efficient design process, the entire team at collaborative days realized the clashes that emerged from the BIM model. Beginning of 2017, almost 500 poles are heathen. After the work-based foundations and ground floor flooring could have begun with the construction of the casco, consisting of prefab concrete and steel. In 28 days the entire casco has been placed.

Thanks to the good preparation, 3D elabo-ration and control in 3D, this has been no problem. A large part of the concrete construction remains visible in the building. Now that the rough construction is finished, the special finishing elements, such as the 6 meter diameter steel ladder and a height of 7 meters, are put together. Pieters Bouwtechniek has also made the constructive design for this purpose.

VORM made the timelapse below which shows the progress of the construction. 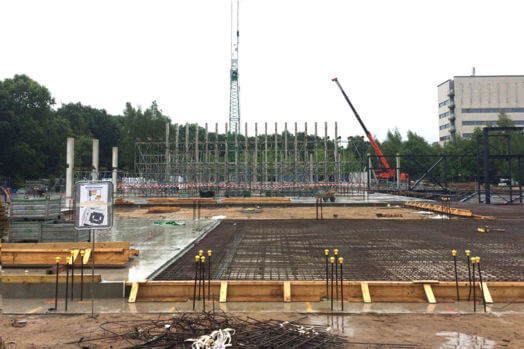