The Patch 22 wooden apartment complex in Amsterdam-Noord is an inspiring example of an ecologically, socially and economically sustainable building project, which is also climate neutral. Pieters Bouwtechniek was chief constructor of this wooden eye-catcher along the water in the Buiksloterham district.

Patch 22 arose from a need to develop in a different, sustainable way. The initiator and client Lemniskade BV, the company of architect Tom Frantzen and construction manager Claus Oussoren, won the Buiksloterham Sustainability Tender with the design. This tender was launched by the municipality of Amsterdam in 2010 and contributed to the municipality's goal of having all new projects built in a climate-neutral manner by 2015. Patch 22 took the lead in the Buiksloterham district.

Flexible
The special thing about the design by architect Tom Frantzen is that it offers space for future changes. This is because the users own a part of the building that they have determined themselves, which they have been able to organize according to their own wishes. They were therefore able to determine the size, layout, destination and desired facilities of their space themselves. The building is therefore able to move with the users and that makes Patch 22 suitable for living, working or a combination of both. In other words: a loft of 540 m2, a studio of 65 m2 and everything in between are possible.

Playful effect
With a height of over thirty meters, Patch 22 in Amsterdam-Noord is one of the tallest wooden buildings in the Netherlands. The six floors, a combination of wooden walls and columns and an open concrete system floor, each four meters high, rest on a concrete table construction that occupies the bottom two floors. In this way, the forces from the wooden stability walls are well distributed over the foundation. In addition to the stability walls in the end walls, the central core in prefab concrete also contributes to the building's stability. The six floors are rotated in turn by a number of degrees relative to each other, making it seem as if they are randomly stacked on top of each other. This creates a playful effect.

Fireproof
The building has a beam-column structure in laminated pinewood. The timber construction is one of the ways to make a wooden building fire resistant. A disadvantage of this, however, is that the wooden appearance is lost. That is why it was decided to oversize the construction: all sides of the wooden columns and beams have been made thicker and the connections are realized within this fire-resistant shell. In the unlikely event that a fire breaks out, some of the wood can burn away without significantly affecting the load-bearing capacity of the structure. The interior spaces are separated from each other with double plaster walls. This not only contributes to fire safety, but also provides sound insulation.

Large span
The complete freedom of layout means that all areas are kept free from structural elements. The self-supporting Slimline floor system, a combination of ceiling, installation space and top floor in one, allows column-free spans of up to sixteen meters. In this case it concerns spans of approximately nine meters. The floors, which consist of fire-resistant concrete slabs with integrated steel profiles, have two support points and transfer the load to the underlying main supporting structure. One of the advantages of this floor system is that the recesses in the steel profiles provide space for pipes, cables and underfloor heating. The weight of the Slimline floor system is also lower than that of others.

Energy neutral
One of the conditions of the municipality of Amsterdam was that the building would be completely energy neutral. This has been achieved, among other things, by mainly using sustainable materials. Two large CO2-neutral pellet stoves on the ground floor also heat the water, the solar panels on the roof generate enough energy to provide the entire building with energy and the rainwater is collected for reuse.

Warm appearance
Patch 22, which was completed in 2015, is a real eye-catcher on the IJ in Amsterdam-Noord. Not only from the outside, but also from the inside. The facades are covered with Douglas wood slats. Inside, all load-bearing walls, ceilings and frames have been carried out in the natural color as much as possible. Precisely because the wood has remained visible in as many places as possible, the building has acquired a very warm appearance despite the sleek design. 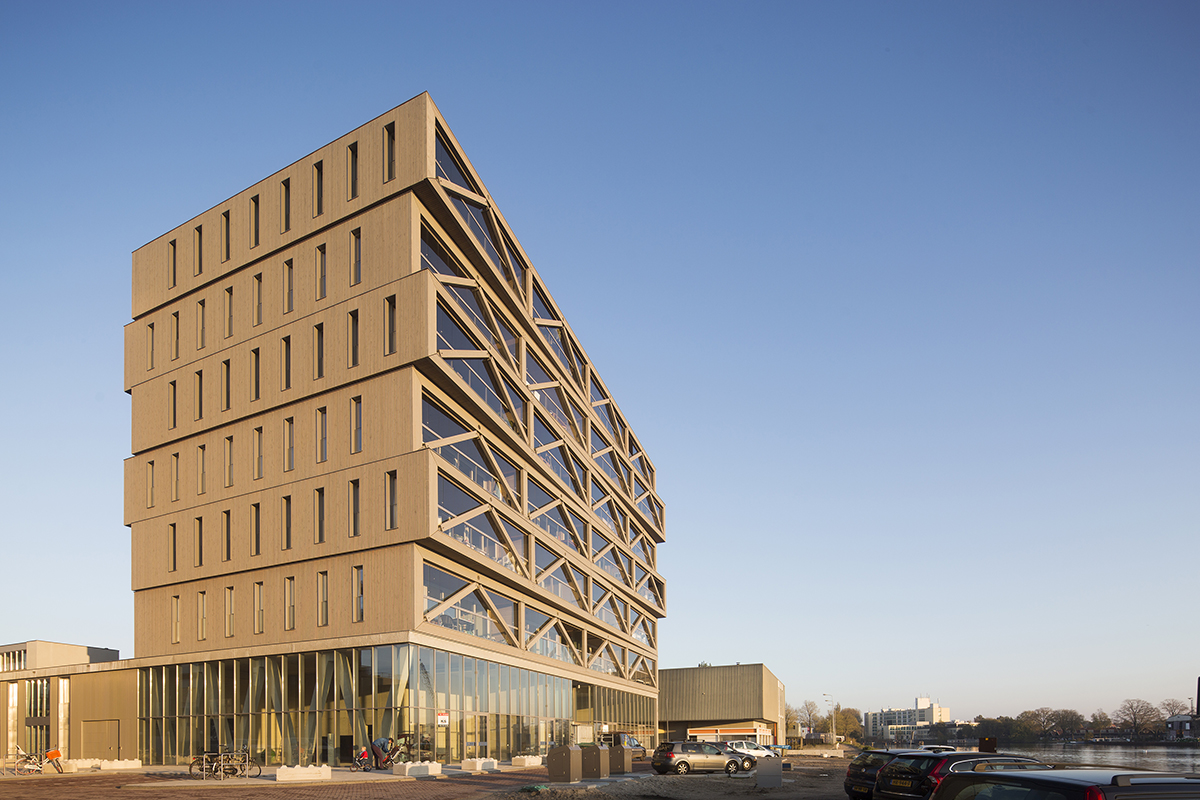