Pieters, together with a team, won the competition for the design and execution of the settlement Marker Wadden by order of Natuurmonumenten. The winning team consisted of Ziegler Branderhorst, Strandbaak, Pieters Bouwtechniek and Kodi.

Settlement Marker Wadden consists of an ensemble of buildings that are situated at the harbor of the new nature island in the middle of the Markermeer. Natuurmonumenten is going to manage the island as a nature reserve and facilitates visitors who come for the birds and the beach. The buildings are prefabricated and transported to the island. The roofs are covered with a tight grid of solar panels and the façades are finished with untreated Dutch larch. Central is the beach tent that also functions as an exhibition and visitor center. Roof shape, materialisation and detailing have been used to strengthen the cohesion of the various functional buildings.

The Marker Wadden is constructed nine kilometers northwest of Lelystad. 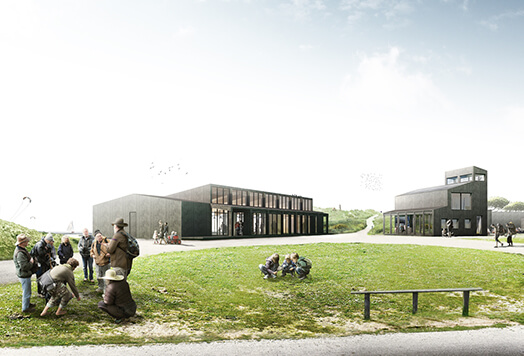