Earthquake-resistant building in Groningen has attracted attention since the quake in Huizinge in 2012. Although gas extraction is being reduced, the recently felt quakes and the latest hazard maps from the KNMI show that the threat is decreasing, but is certainly not imaginary.

Pieters is a specialist in constructions for buildings in an earthquake zone. Pieters is involved as a seismic constructor in, among other things, the new construction of the childcare centers in Loppersum, Middelstum and Stedum.

These childcare centers are designed to withstand earthquakes and are suitable for providing new forms of education. Despite the stability required for earthquakes, we have succeeded in making the building optimally flexible in terms of layout, which gives the building the capacity to adapt to demographic developments in the region. Sustainability is also being considered: the building is almost energy-neutral, with much attention being paid to the insulation of the building and its installations.

Jorritsma Bouw realizes sustainable childcare centers in Loppersum and Middelstum. These quake-resistant and gas-free buildings have a shell that can move in the event of earthquakes. The steel structure is sunk in the concrete foundation and reinforced with seismic connections, in which the required energy absorption can also take place. This way childcare and education get a safe building.

Jorritsma Bouw had a video made about the childcare centers. 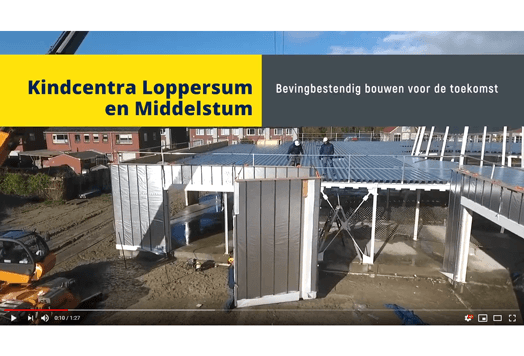